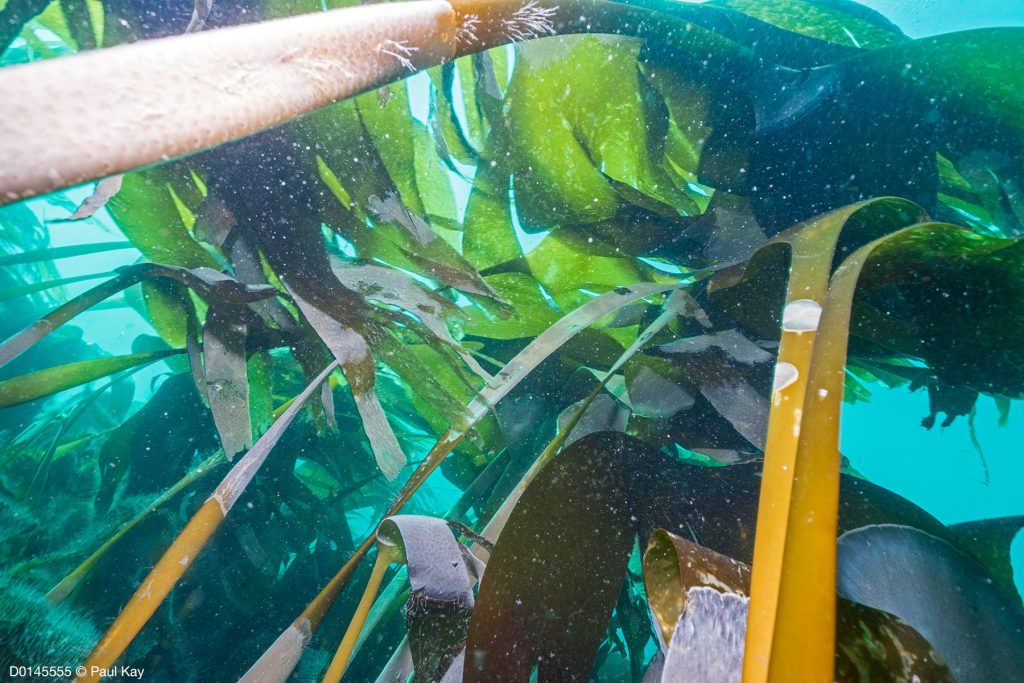 Winter and our wonderful seas

During December we decided to reflect on how winter impacts our seas and the wealth of life within, whilst also celebrating a year worth of fascinating features!

It is not just life on land that is affected by the shorter days and cooler temperatures of winter. The seasons also affect many plants and animals in the sea which show marked change in their behaviour as they respond to the changing environmental conditions at this time of the year.

Visible effects of winter in the sea

For those of us who prefer to keep our feet firmly on land, one of the more obvious signs of the effect of winter on the marine environment is the large accumulation of seaweed washed up on the shoreline. Some seaweeds – such as Kelp – are perennial, with often only a small part of the plant, sometimes just a crust of living material, remaining attached to the seabed throughout the winter. Larger pieces of seaweed from these perennial plants, together with the fronds of annual seaweeds, are stripped from the seabed by autumn and winter storms. Much of this broken off plant material is dispersed widely within the marine environment and is an important addition of organic matter into the marine food chain and contributes to the sequestration of carbon by the marine environment.

The proportion that ends up on the shore creates a strandline habitat that provides a home for small invertebrates such as sand hoppers to survive; in turn they provide food for birds foraging on the shore. This strandline plant material also contributes organic matter and moisture to beach sediment that can encourage growth of so-called pioneer coastal plants which can help to stabilise the upper shore.

There are examples of some marine animals becoming completely inactive over winter, and seemingly going into a form of hibernation for a number of months. For example, the feeding polyps of the soft coral, Dead man’s
fingers, that give this animal – a relative of sea anemones – a furry appearance when they are extended, can remain withdrawn giving the creature a leathery look.

Another colonial marine animal where the transformation from summer to winter forms is quite dramatic is the Football sea squirt. During the winter the individual units (known as zooids) of the colony break off, leaving a rather shapeless lump which, come spring, will once again transform itself as new zooids regrow.

Other animals hide themselves away to avoid the ravages of winter conditions. Some individual  blue-rayed limpets, which feed on kelp fronds during the summer, move down the plant into the claw-like holdfast of the kelp as autumn approaches, to avoid being swept away as the kelp fronds break off during winter storms. Other mobile species, such as bottom-dwelling and territorial fish like Ballan and Cuckoo wrasse, tend to tuck themselves away into crevices and holes. Other species move into deeper water offshore.

Surprisingly, despite the apparent inhospitable conditions of winter, this is a time when some marine species are actively breeding, spawning or laying their eggs. This may be part of a life strategy that enables them to avoid predators that are likely to be more active in the spring and summer, or it may be a strategy that enables their offspring to exploit an anticipated abundant supply of food as the seawater warms and daylight increases as we move into spring. But in general, as on land, underwater through the winter has an overall sense of nature slowing down for a time, with much less seaweed growth and generally fewer marine animals to be seen.

This seasonal pause in the frenetic activity of marine life around our coasts gives us an opportunity to reflect on our connections to, and dependence on this largely invisible part of world. The functioning of our oceans, including the seasonal changes and variations, is part of a continuous, globally connected cycle of activity to which we are inherently connected in so many ways; from the pleasures of time spent at the coast and personal encounters with marine life, to the global influence of the oceans on our climate and the supply of oxygen we breath.

Our Feature Focus artciles over the past year have showcased a small amount of the diversity of marine life living on the coasts and in the sea around Arran, in the wider Clyde and further afield in Scotland, and have highlighted the importance of the Lamlash Bay No Take Zone and South Arran Marine Protected Area to help recover and protect that marine life. As Scotland’s Year of Coasts and Waters 2021 draws to a close, as well as celebrating the wonderful and fascinating plant and animal life of our seas, we celebrate the continued efforts of the community on Arran and of others elsewhere, to champion the marine environment and their calls for better protection and management into the future.