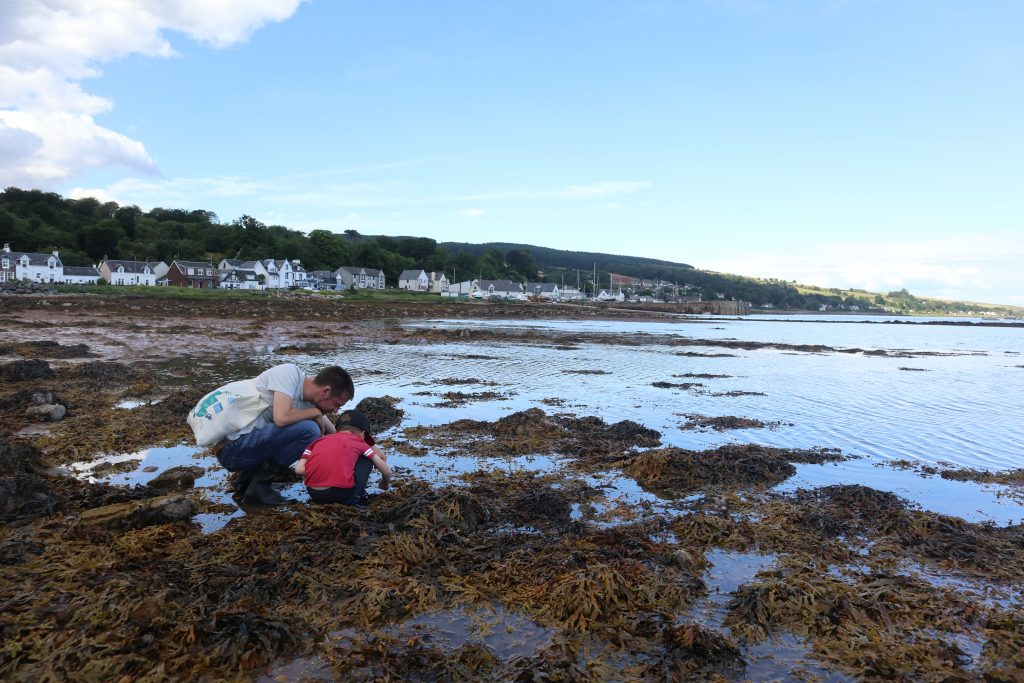 Here we bring you a little bit closer to the vast array of seashore and coastal habitats we have around Scotland.

The hot sunny weather over recent weeks means that a lot of people have been spending time on the beach and enjoying a cooling dip in the sea. While relaxing and enjoying time on the coast, it is not immediately obvious that this is one of the more extreme environments for Arran’s marine life. The seashore is a particularly challenging habitat for animals and plants which have to survive being alternately submerged and exposed to the air and the extreme changes in temperature and other conditions that this brings. Not to mention surviving the power of waves crashing on the shore in winter storms.

Sometimes referred to as the ‘intertidal’ (the area between high and low tides), the seashore presents unique opportunities to explore the local marine life without having to go underwater. As well as the possibility when out on the shore of seeing larger marine animals such as those we highlighted last month, the creatures and plants that can be seen when the shore is exposed at low tide are equally as fascinating and can be viewed close up.

The importance of seashore and coastal habitats

Marine species vary from the high to the low water mark, reflecting the tolerance of different animals and plants to the varying conditions. This creates a pattern of biological zones across the shore and is most obvious on rocky shores where bands of different seaweed species and barnacles can be quite visible. Whilst it is less obvious on sandy shores, as the marine life is buried in the sand, similar zonation still exists.

Species best adapted to survive long periods exposed to the air (or, conversely, terrestrial species that can survive the influence of salt water for short periods) are found at the top of the shore. Most obvious are lichens, with patches of green, grey and yellow lichens able to occupy the most landward areas of rocky shore where other species can’t survive. There are some particularly spectacular upper shore lichens along parts of Arran’s west coast. Below the lichen zone is a brown seaweed called Channelled Wrack which, as its name suggests, has a channel along the length of the fronds. This species spends up to 90% of its life out of seawater and has adapted to its place on the shore to such an extent that it dies if kept permanently submerged.

Moving seaward from the Channelled Wrack, the subsequent zones are identified primarily by the presence of other brown seaweeds in turn: Spiral Wrack, Bladder Wrack, Egg Wrack, Serrated Wrack and finally kelp which, while not really a seashore species, can be seen emerging from the water on very low tides. The collapsed clumps of seaweed that are seen when the tide goes out help to retain moisture within the plants, meaning that species such as flat top shells and even some small fish, such as shannies and butterfish, can survive under the damp seaweed until the tide comes back in.

The seaweed species present on our shores and their growth say a lot about the nature of a shore. In more exposed locations, some of the large brown seaweeds modify their shape – Bladder Wrack, for example, loses its characteristic gas bladders, so there is less drag on the plants in rough seas. In more sheltered conditions Egg Wrack is likely to be more abundant.

As with seaweeds, the seashore zones favour different animal species which have adapted to live in this turbulent environment. Molluscs such as winkles and dog whelks (sea snails) have a hard ‘plate’ which they close and use to seal their shell to prevent them from dehydrating. The beadlet anemone protects itself when the tide is out by pulling in its tentacles and forming a rounded, jelly-like red or green blob on the rock.

The topography of the shore is also important – overhangs and crevices provide cool, damp shelter for species such as dog whelks, anemones and sponges when the tide is out, and spaces under boulders can provide hiding places for starfish, crabs and fish. Rockpools often provide a foothold for animals and plants that would otherwise not survive on the shore – they can be particularly rich in marine life and provide a glimpse into the submerged world beyond the low water mark.

Slippery by name, slippery by nature, butterfish are named because they literally slip through your hands like butter. Their minute scales are embedded in this very slimy skin. These fish are commonly found in the inter-tidal zone, and they can survive for long periods of time in damp sand or under heavy seaweed. In the winter, they retreat into deeper waters where divers often encounter them as the fish hunt for small creatures to feed on, such as worms and sea slaters.

These fish are easy to distinguish from all others you will find on the shore. Apart from their eel-like appearance, it is identifiable by the black “saddle spots” which line the base of its dorsal fin. There are usually 12 of these, and they are equally spaced along the creatures back.

Our coastal and seashore habitats are excellent places to explore, and do a world of good for our mental health and general well-being. Many studies link time spent on, by or in the sea with less physiological distress; so called “blue spaces” affect the way we feel in a positive way, meaning less stress and more energy.

As mentioned last week, the seaweeds present on our shores help inform us of the exposure that particular piece of coast is commonly subject to in terms of to the tide and prevailing weather. The varying topography found on different shores and coastlines benefit us as areas with more rocky shorelines or large sand-dunes provide anatural coastal defence to our seaside towns and villages.

As mentioned, our seashores are amazing places to explore; so hire one of our rockpooling backpacks to discover what’s on our shores for yourself. While we generally explore the seashore when the tide is out, exploring it by snorkelling when the time comes in provides a completely different perspective. Flattened clumps of seaweeds are transformed into magical floating meadows, and small fish, crabs, starfish and other marine life busily go about their business in the window of opportunity provided by the rising tide. Even barnacles come alive when submerged, their feather-like feeding legs combing the water for microscopic organisms. Go on, take a plunge on Arran’s Snorkel Trail and discover all this for yourself!

Threats to coastal and seashore habitats

Given the natural stresses that it has to endure, we might think of seashore marine life as being fairly robust, but it can be as easily affected by human activities as those underwater. Extreme weather and warming seas pose serious challenges for species exposed to both water and air. As sea levels rise, where man-made and natural obstructions such as roads, buildings and cliffs prevent seashore habitats extending landwards, we are likely to lose substantial areas of intertidal habitat. These are also a risk to these habitats as humans interfere and develop more and more coastal homes.

Activities such as extraction of beach sand and gravel from the shore can be problematic, as can pollution from both land and sea. Dumping of waste is of course an issue, and leads to the build-up of marine litter on our shores which impacts many fauna and flora that inhabit the area.

Get involved to help our seashore and coastlines

On Arran, the Lamlash Bay No Take Zone and South Arran Marine Protected Area are helping protect parts of our seashore habitats. The NTZ, for example, prevents any life being taken from the shoreline up to the high water mark.

We can all help protect our seashore and coastal life, from as simple a thing as picking up litter we see on the beach when out walking. If you’re hardly ever near the coasts, easy actions in your day-to-day life can still help protect them; use a reusable water bottle, ditch single-use plastics such as straws, cups and cutlery and always remember a reusable bag when out shopping. All these actions help significantly reduce the likelihood of plastics washing up on our coastlines and threatening the animals that rely upon them.

One further step folks can take to help protect the coastlines we mentioned a couple of months back and it relates to the breeding seabirds we have on our shores. Remember to walk below the high water mark, or stick to designated paths and walkways during spring and summer months to avoid accidentally destroying highly camouflaged nests and eggs of resident seabirds such as oystercatchers and gulls.