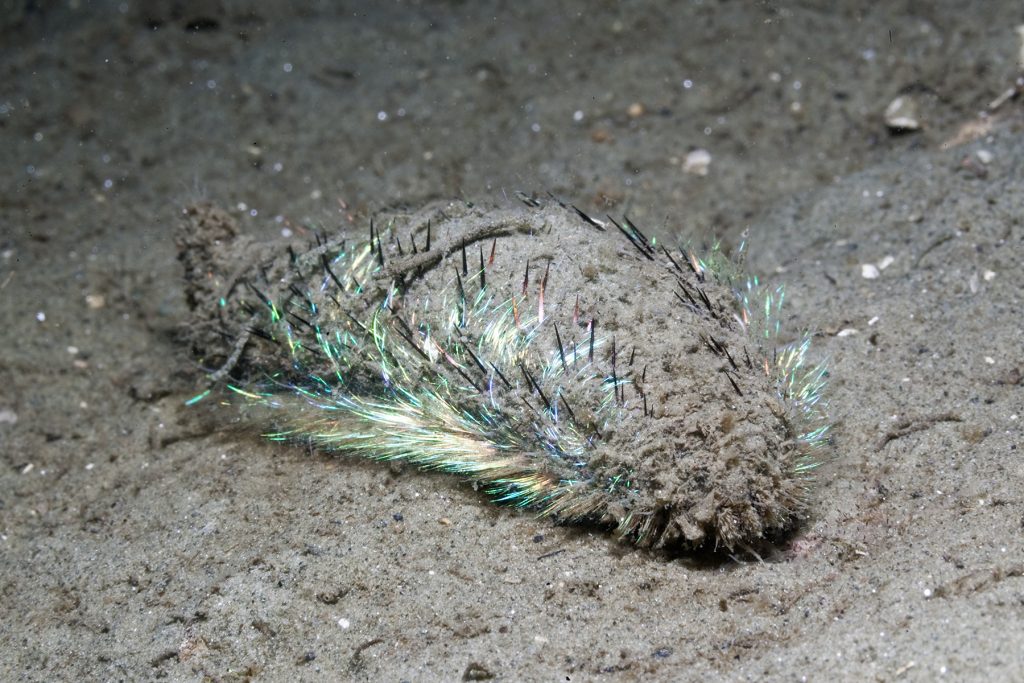 Here we bring you a little bit closer to what lies beneath our waves with a focus on the Sand and Gravel habitats found in Scotland’s seas.

Glorious sandy beaches are one of Scotland’s great attractions and Arran too has its fair share of sandy shores… but these are not usually the first places you would think to visit to find fascinating marine life. Sands and Gravels of Arran’s shores extend underwater and, where they do, they form extensive and important, yet often overlooked, marine habitats.

It is easy to see why sediment habitats tend to receive less attention. The lack of hard rock surfaces means there are far fewer animals or plants attached to the surface, so they tend to look visually less appealing. Explore within the sediment though, and it becomes apparent just how much diversity these habitats support.

The presence of small stones or larger pieces of shell within sands and gravels can provide an attachment point for some plants and animals that are more familiar on rocky reefs and so enable them to survive in sediment habitats. This highlights an important aspect of sediment – it can be highly variable, ranging from fine muddy sand to coarse gravelly substrate and everything in between, as well as mixtures of sediment types; these variations provide opportunities for a myriad of marine species.

The importance of Sands and Gravels

Sands and gravels are generally dominated by animal species. Ranging from large, more familiar animals to small microscopic creatures that live in the spaces between the grains of sediment there is a wealth of marine species that call this habitat a home.

As well as the abundance of life within the sediment, more familiar-looking animals such as crabs, shrimp, fish, starfish and marine snails can be found on the sediment surface; many of these also make use of the protective cover of sand and gravel to hide in and camouflage themselves.

Our sand and gravel habitats provide a habitat for commercially important shellfish species, and they also play a really important role in the marine food web, providing and essential nursery area for many species. Small shellfish, crustaceans and worms in the sediment provide food for larger species such crabs and fish which, in turn, are food for larger predators such as sea birds and marine mammals.

Sands and Gravels are home to a wealth of some pretty cool marine life… Did you know we have mice in the sea? And cucumbers? And potatoes?!

The Sea Mouse (Aphrodita aculeate): Okay, so these creatures are not mice like their name – or their furry appearance – may lead you to believe. The sea mouse is actually a type of marine worm, which can grow up to 15cm long. Its body is covered in stunning, iridescent bristles giving it a mouse-like fur. The underside of this creature shows the 40 odd scaled segments which make up the worm, which are a brownish yellow colour. Look closely at this mouse’s head, and you may see some of the animal’s shorter tentacles protruding.

Sea Cucumber: These are found in waters across the world, and in some countries they are classed as a delicacy. Here in Scotland, we don’t eat them, and the specific species we’re choosing to highlight is the Gravel Sea Cucumber (Neopentadactyla mixta) as it is a species of special interest in our MPA. The only part of this animal visible from the surface is its extended tentacles when it is feeding, which have specialised sticky areas to trap food particles as they float past in the water column.

Sea Potato (Echinocardium cordatum): Not anything like the potatoes we grow on land, but these creatures do live buried just beneath the surface of the seabed. Sea Potatoes are a type of Urchin, commonly known as the ‘heart urchin’ due to the white “test” (shell) of the dead animal you can find on the shore. Safely nestled in their burrows, they use their tube feet to live on dead animals and plants which you sometimes see poking out through the dense felt of yellow spines on their body.

Nodding Hydroid (Corymorpha nutans):These creatures grow up to 10cm in height and are found dwelling solitary in sand and gravel substrate, to which root-like threads attach. The stems of individuals have lines that run longitudinally from the base up to the relatively large polyp. The polyp bends over to one side, giving this hydroid its name – nutans is Latin for nodding! As they sway in passing currents, these animals really do look as though they are slowly nodding in agreement.

The Highland Dancer (Pleurobranchus membranaceus) is a type of sea slug, that gets its common name from the way it ‘dances’ as it swims upside down through the water column. Pleurobranchus reach typical lengths of 12cm and are more commonly observed as large, round, bobbly blobs on the sea floor. The creatures’ body consists of a mantle (the organ that protects its main organs) which is covered in short fleshy projections (tubercles), and a white foot which forms a skirt which is what we see – more rarely – ‘dancing’ or flapping like a wing in the water. Video credit: Howard Wood

Our Sand and Gravel habitats play a globally important role within our seas and oceans, by helping to cycle elements such as carbon and nitrogen, as well as contributing to natural climate mitigation through capture and storage of carbon. They are also key fishing grounds, as many commercial shellfish call this habitat home.

One of the oldest living animals – a special feature of the South Arran MPA in its own right – is the Ocean quahog (or Icelandic cyprine); this extraordinary species can live for over 400 years and prefers sand and gravel habitats. These bivalves can be aged using growth rings present on their shells, which also contain chemicals that provide scientists with an insight into past climatic and environmental conditions helping shape past and future modelling of our sea.

Threats to Sands and Gravels

Many of the creatures that inhabit our sand and gravel habitats are sensitive to disturbance and have a low tolerance to changes in their environment. Animals in these habitats are facing increased impacts from open-cage aquaculture, as detritus from these farms drop to the sea floor, smothering any life present.

The presence of commercial fish and shellfish make sand and gravel habitats a target for fisheries, some of which can have a significant and lasting impact on the marine life communities that live in them. Some of our burrowing bivalve (two shelled) animals are extremely vulnerable to bottom trawling which results in direct mortality of the animal when disturbed. Damaging fishing methods also destroy habitats to the extent they are no longer suitable as nursery grounds for juvenile fish.

Can we protect Sands and Gravels?

As mentioned earlier, sand and gravel habitats and their inhabitants are extremely sensitive to anthropogenic impacts.

Here in the South Arran Marine Protected Area, the fisheries management measures in place are helping ensure that these important habitats are given the opportunity to recover and thrive, and contribute to healthy and productive seas around Arran.

Get involved to make a difference!

How can you personally help to protect our sand and gravel habitats we hear you ask?!

Well, if you are a seafood lover, you can do your part by sourcing only creel (pot) caught shellfish such as lobster and crab, and seek hand-dived scallops to fill your plate. These fishing methods use less damaging means to gather their catch, allows the sand and gravel habitats to remain healthy for other species which rely on them.

If you are a boat user, we encourage use of moorings or pontoons where available, instead of free anchoring. In the proposed Highly Protected Marine Areas for England and Wales (Benyon Review, 2020), anchoring will be included in the list of prohibited human activities in a bid to improve the health of our oceans.