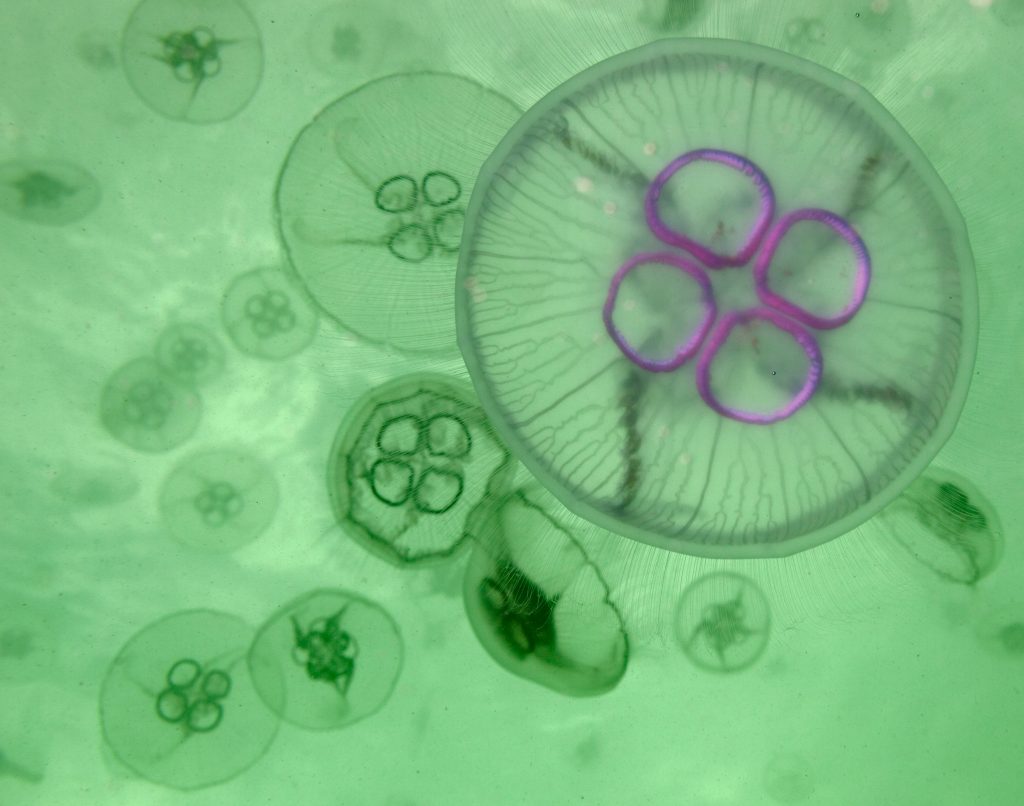 Here we bring you a little bit closer to what lies beneath our waves with a focus on the productivity of our seas and seabirds that are found in and by Scotland’s seas.

The warmer days of spring seem to have taken a long time to arrive. Even so, life in the sea is already responding to longer hours of daylight which herald one of the most important times of the year. For many marine species this means a boom in productivity, and on our coasts we witness amazing sights such as nesting seabirds and seal pupping.

Beneath the waves, smaller marine plants that are, for the most part, invisible to the naked eye, are also growing rapidly. These are planktonic plants which in their countless numbers fuel the marine food chain, whilst simultaneously producing a significant proportion of the oxygen we breathe.

Increases in temperature and daylight length from spring through to early summer trigger what is known as a bloom in plant plankton (phytoplankton) where their numbers increase at an extraordinary rate, followed by a corresponding increase in animal plankton (zooplankton). Signs of this major seasonal change include a period of cloudiness or decreased clarity of seawater as these vast numbers of tiny organisms flourish.

Another very obvious sign that spring is in full swing is the appearance of the larger, well-known and more visible members of the plankton family, including comb jellies and jellyfish. While swimmers and snorkellers may understandably view stinging jellyfish species such as the lion’s mane and blue cyanea with some trepidation, encounters with the spectacularly large barrel jellyfish and the easily identifiable moon jellyfish generally cause little ill effect, although some people can still be sensitive to their far milder stinging cells.

The importance of productive seas and seabirds

Why are plankton blooms so important to our seas? Well they are a sign that our oceans are bursting with life. Some plankton species are only ever found as part of this floating soup of life while others, such as the larvae of fish, crabs, lobsters, prawns, scallops, starfish, sea urchins and other seabed-dwelling marine species, only embrace the planktonic stage of life briefly prior to transforming into their adult forms.

There’s a lot of different species to shout about this month for Productivity and Seabirds. Just some of our favourites are mentioned below…

Bolinopsis infundibulum is a type of comb jelly. Comb jellies actually belong to the phylum Ctenophora and not Cnidaria which contains true jellyfish.

B. infundibulum can be fairly abundant at this time of year near the surface of the water. Its body appears almost transparent, but it has distinct combs (hairs lines) running the length of the body which create iridescent patterns of shimmering light around its body giving them a magical appearance.

Both plankton populations and also seabird numbers can be strong identifiers of the health of the marine environment, something humans who use the sea should be keeping a particularly close eye on. Distribution and abundance of these species can indicate rising sea temperatures and any shifts, particularly in the abundance of plankton, can have knock on effects throughout the whole marine food chain, including impacting us at humans.

This month our seas turned a colour positively reminiscent of the Mediterranean and, although recreational scuba divers may not enjoy the less than half meter visibility this plankton bloom offers up, it is clear locals and holiday makers alike are enjoying the scenes. We all love to see megafauna in our seas, such as minke whale and basking shark, and their presence is largely driven by the abundance of their primary diet – plankton! These key reasons are, in part, the reason that healthy, productive seas are the driving force behind marine tourism, which accounts for 14% of all tourism in Scotland, contributing to 4% of our economy (the equivalent to contribution made from fisheries and aquaculture combined).

Threats to the productivity of our seas and seabirds

All the productivity at this time of year is, in general, good news for our marine wildlife. This said, the low lying coastlines around the Clyde region and ease of access along the coast for many human activities are not conducive to breeding seabirds. Many species we find on Arran – Oystercatchers, Gulls – lay their eggs on the shore, just above the high water mark. These eggs are so well camouflaged and look so like rocks that they are easy to miss with the human eye. To avoid accidentally stepping on a nest, we suggest you walk below the high water mark, or stick to designated paths and walkways. Additionally, it is important to listen and watch the creatures who you may be unknowingly disturbing; oystercatchers will make a lot of noise so you will be aware they are in distress, whereas some bird parents will feign a broken wing to draw predators away from their nest.

Sadly even those seabirds that nest out the reach of humans are threatened by our impact, as evidenced by one of the attached photos that depicts Gannet nests filled with waste fishing nets the bird will have gathered from the sea whilst building.

Get involved to help protect plankton and seabirds!

As they are at the top of the food chain, seabirds can be an indicator of the health of the marine environment. Sadly, across the whole of the UK, seabird numbers have been declining since the 1990’s; this is reflected in some of the populations within the Clyde. The Joint Nature Conservation Committee co-ordinate the Seabird Monitoring Programme (SMP) which, since 1986, has been monitoring 25 species of seabirds that regularly breed in Britain and Ireland. The SMP welcomes volunteer survey work to help complete counts, to collect data on breeding numbers and success on populations both regionally and nationally to enable bird conservation status to be assessed.

At the other end of the food chain, long-term monitoring of plankton populations has revealed some profound changes in distribution and abundance of planktonic species around the UK, some of which has been linked to increase in seawater temperatures. Understanding long-term changes in the plankton community is an essential part of monitoring the health of our seas. The 2020 Assessment of Scotland’s Marine Environment acknowledges that there are many gaps in our knowledge about plankton in Scottish waters and highlights the importance of continual monitoring of these keystone species.

Whilst the No Take Zone and South Arran Marine Protected Area were not specifically set up to protect plankton (or seabirds for that matter), the recovery of seabed habitats in these areas is contributing to improving the overall health and resilience of our local marine ecosystems. Protecting species whose offspring spend some time living as plankton can only be a positive step forward.