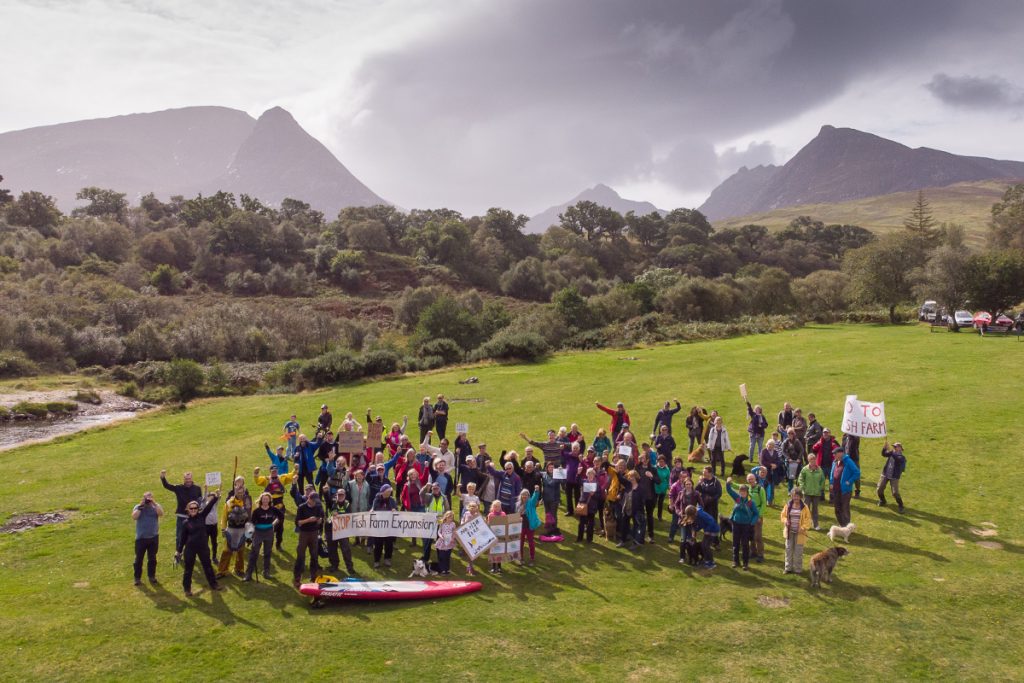 Islanders are jubilant after a proposal to build a large salmon farm off the north coast of the Isle of Arran was turned down at a North Ayrshire Planning meeting in March. Councillors on the committee voted unanimously to reject an application for planning permission from the Scottish Salmon Company (SSC), as they rightly acknowledged the special qualities of the area and the vital importance of Arran’s natural environment for both the island’s economy and wellbeing. This momentous decision follows a refusal by the Highland Council last year to grant permission for a salmon farm off Skye – a decision which was subsequently upheld by the Scottish Government’s appeals process.

Campaigners from a large cross-section of Arran’s community have been opposing the plans for the last two years, with over 200 people of all ages attending a march out to the proposed site in 2019 and since then, under Covid restrictions, islanders have camped-out and laid stones on a large community cairn in protest. The council also received over 430 objections to the application in response to the mandatory public consultation phase. Such a large, noisy, artificially-lit industrial development was felt to be totally out of place on a wild section of Scotland’s spectacular west coast and the effects on the marine environment were seen as equally unacceptable.

Objectors raised concerns over the intensive nature of this fish farming, both in terms of animal welfare and the fact that the densely stocked cages are breeding grounds for disease and parasites, which then easily spread to the wild salmon and trout populations, with devastating effect. The industry uses toxic chemicals to combat the parasite problem but these pollute the wider area and are harmful to crustaceans. The sheer concentration of waste from 500,000 fish in a limited area is another source of pollution, which smothers the sea bed beneath the cages and has the potential to wash up on the nearby coast.

The fish themselves can also find their way into the open sea. In just one storm-damage incident last year, nearly 50,000 farmed fish got into the Kilbrannan Sound and dispersed as far away as the North West of England. Interbreeding with such escapees poses perhaps the biggest threat to the dwindling wild salmon population.

The environmental impacts of salmon farming are numerous, and arguably just as damaging are the economic costs to communities where farms are sited. Arran’s local economy is underpinned by the quality of the island’s environment, with many thousands of visitors flocking to the Isle of Arran every year to enjoy the wild, tranquil coastlines such as that at Millstone Point which was threatened by this application. The very many local businesses which rely on tourism for their income stood to be impacted by a reduction of Arran’s appeal to visitors; if visitor spending decreased by just 5% because of this development, up to £3 million per annum would be lost from the island’s economy. Against this the SSC offered a handful of jobs, which undermined the Council’s own Community Wealth Building Strategy to make the local economy work for local people and protect the environment.

Andrew Binnie, Director of the Community of Arran Seabed Trust, called for an immediate halt to salmon farm expansion: ‘This decision shows once again that communities can stand up to the likes of the Faroese Scottish Salmon Company. However, this is at great cost to communities who would rather be engaged in restoring biodiversity and tackling climate change. The Scottish Government in Edinburgh should halt salmon farm expansion immediately and listen to the islanders who have to live with these unsustainable ventures’.

COAST would like to thank everyone who donated and/or signed petitions about this campaign. All support is vital for communities like the one on Arran, who collectively have once again proved that locals can take the destiny of their coastal waters into their own hands.