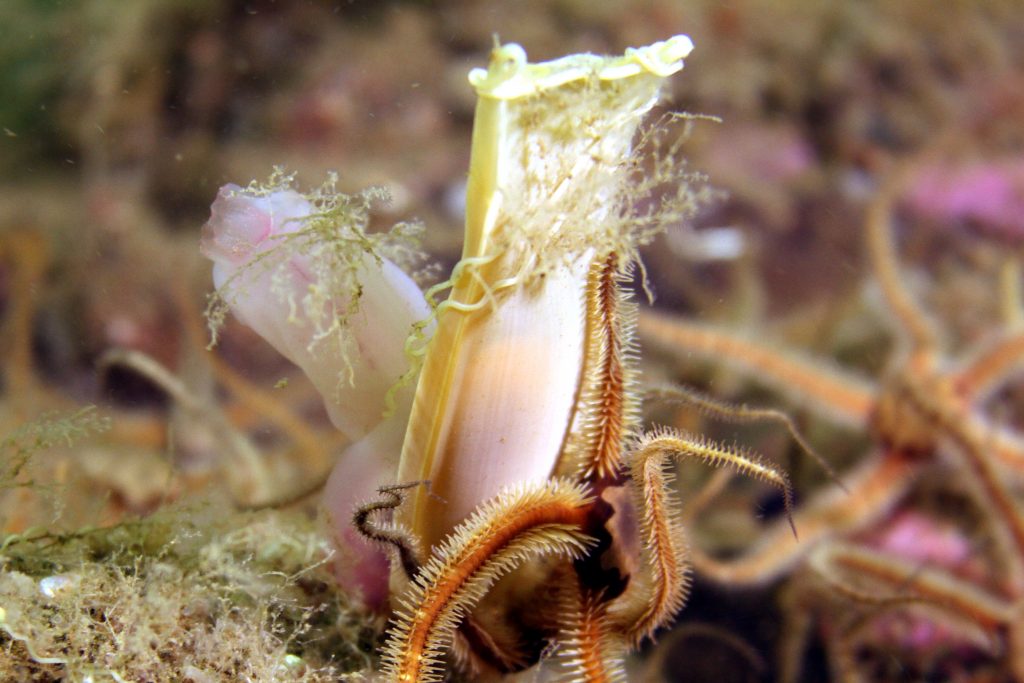 It was mid-summer 2019 when COAST divers took a dip in the South Arran MPA, where they came across something very special – a Mermaid’s Purse. They discovered this treasure secured tightly to seaweed by curly tendrils located at the both ends of the Purse. But how had it got there?

Well Mermaid’s Purses, as exciting as they sound, are not the handbags belonging to mythical half-fish half-human species; they are the egg cases of shark, ray and skate species. This particular purse that COAST divers found belonged to a small-spotted catshark (Scyliorhinus canicula). Growing up to 75cm long this species (also known as a dogfish) has a typical “shark shape”, with a slender body and small pointed dorsal fin. Catshark are five-gilled sharks, and their nostrils can be found on the underside of their rounded, blunt snout. Like all sharks, this species has rough skin due to the “dermal denticles” (tiny skin teeth) that it is made up of. This means that if you run your fingers down from snout to tail (if indeed you ever get close enough to one to be able to try – hint, come visit us at the Discovery Centre!), it feels smooth; run them in the opposite direction and you will encounter a bit of difficulty. Due to its composition, shark skin was the original sandpaper.

Now, where were we? Oh yes, Howard and Don were on a dive in our cold yet clear waters around the lovely Isle of Arran. After spotting the Mermaid’s Purse, Howard realised that there was an opportunity waiting to be had. So, very carefully, he detached the Purse from the seaweed and placed it in a sealed box filled with seawater. Ascending slowly and carefully back to the boat, Howard transported the egg case to its new home: the catch and release marine tank at Arran’s Marine Visitor Centre, The Discovery Centre.

For those of you yet to visit, the COAST Discovery Centre is a place of – you guessed it – discovery, where you’ll find out all about amazing sea life and the key things needed to protect it. You’ll find out just how hard the Arran community have worked to conserve and recover their precious sea beds, and even get to see some of the creatures that dwell beneath the waves for yourself.

And so, the Mermaid’s Purse was brought to the Centre by Howard, and placed in its very own little hatchery cage – a special enclosed area – within the marine tank so that other creatures couldn’t get to it. And here it stayed, closely and lovingly monitored by COAST staff and volunteers over the coming months. During the winter months, visitors enjoyed learning all about the wonders of the Mermaid’s Purse and the animal that laid it. If they looked carefully enough, they would see the baby shark growing inside, every-so-often wiggling around to open tiny slits in the case that would enable a fresh influx of oxygen-rich water to aid development.

As we entered March of 2020, it was suspected that there was not long left before this baby shark would hatch – fully formed and ready to be free from its protective case. Sadly, as events of 2020 began to unfold, the Discovery Centre had to close and staff moved to working from home. Staff made the decision to release all creatures from the marine tank back into the wild, to reduce the tasks associated with keeping live animals and a salt water tank. However it was decided that, given the advanced stage of the shark development and the nurture that had gone in to ensuring it survived to hatching age, the Mermaid’s Purse would remain in the tank.

During one of the weekly tank checks, it was with bittersweet happiness that Jenny discovered that the baby shark had hatched, and seemed healthy and happy. We now faced another big decision: did we let it go when it is was so tiny, or did we nurture it and meet the demands of a new born over the coming months? In an ideal world we would have proceeded with the latter, but we are not living in an ideal world. Therefore, Wee Sharky was released into the wild later that week. We released it on a low tide, and we let it go on the edge of the Lamlash Bay No Take Zone – a habitat rich area where it stands the best chance of survival, with plenty of hiding places and rich feeding grounds.

Although we are sad we didn’t get to see the shark hatching, we are delighted that we know we can provide a happy, healthy environment for them to grow whilst also providing a fantastic educational opportunity.

We know many of you will be sad you weren’t able to visit us to see Wee Sharky in person, so we are delighted to share this release video with you, and hope you get some enjoyment and happiness seeing it swim free. Rest assured, we watched it dive deeper down and out of sight before leaving.

Additional Note:
Many different (but not all) species of sharks, skates and rays lay their young in Mermaid’s Purses – tough, leathery capsules that protect the embryo as it develops. You can find out more about all the different varieties – and how you can report sightings you find on the beach – by visiting The Shark Trust’s Great Eggcase Hunt page.
We also recommend exploring their page for further facts and great pictures of other species of sharks.