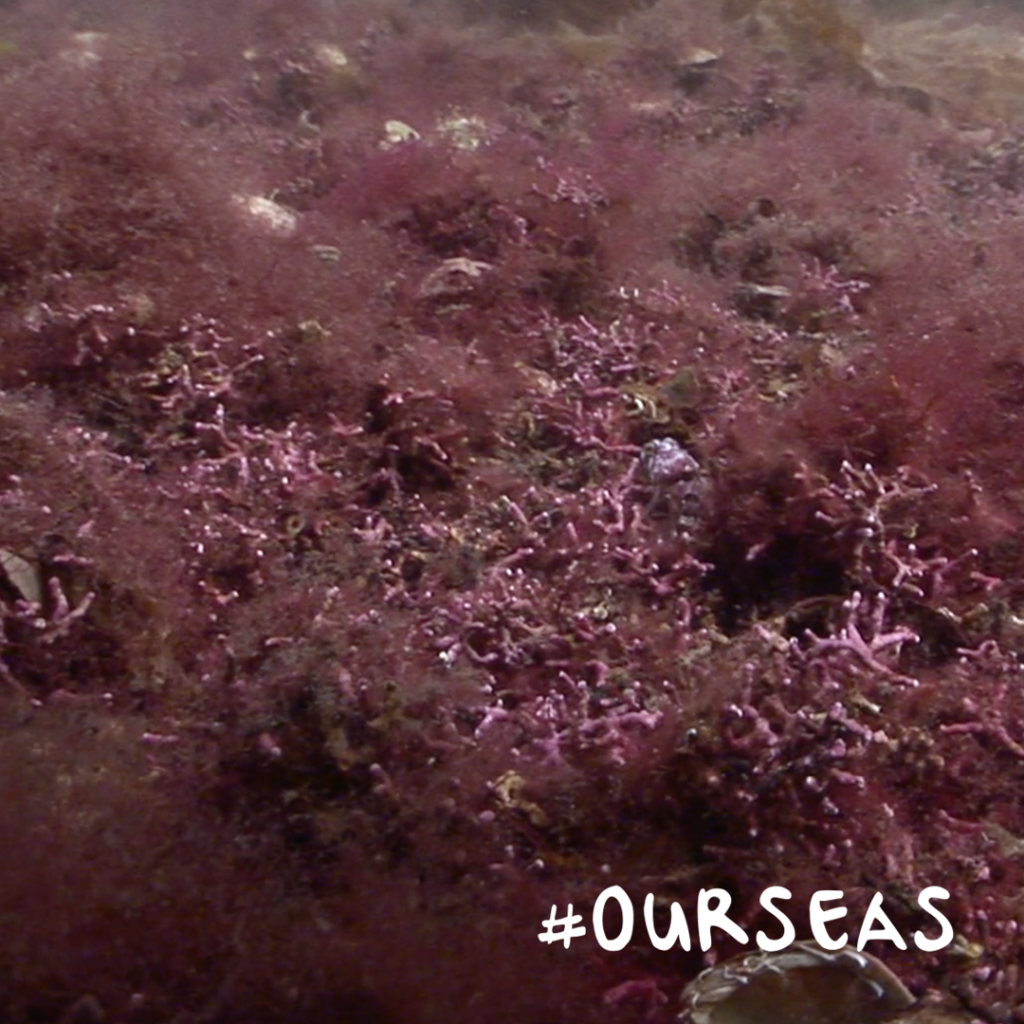 In the run up to the United Nations Conference on Climate Change (COP26), we focussed on Blue Carbon and the variety of habitats and species in our seas that help us as we tackled challenges presented by climate change.

In May 2019, the Scottish Government declared a global climate emergency in response to climate change linked to elevated levels of carbon dioxide (CO2) in the atmosphere. With Glasgow hosting the United Nations Climate Change Conference (COP26) in November this year, there is a lot of attention on climate change and the personal and collective actions that we can take to ensure a habitable planet for the future.

Whilst we need to reduce the amount of greenhouse gases we produce, measures to remove greenhouse gases from the atmosphere – such as protecting and restoring natural areas – are being seen as an increasingly important part of an overall strategy to tackle climate change. Some habitats on land, such as rainforests, woodland and peat bogs, are known as being very effective at removing CO2  from the atmosphere as plant tissues and soil can lock in carbon. However, Scotland’s marine habitats and species have received far less attention for their role in combating climate change.

Results of ongoing research, both in Scotland and further afield, are increasing our understanding about the critical role our marine habitats and species play in capturing and storing carbon; as well as informing us about the management decisions required to ensure that the captured carbon in coastal and marine ecosystems – so called ‘Blue Carbon’ – actually stays locked up into the long term.

The importance of Blue Carbon

In Blue Carbon ecosystems, carbon is captured in the living tissue of marine animals and plants and also in their shells and skeletons, such as the shells of scallops and lobsters and coralline seaweed such as maerl. A lot of carbon-based material also gets washed into the sea from the land and this, along with material from marine habitats and plants, can become stored within seabed sediments which then act as a carbon sink and lock the carbon away, potentially for thousands of years. The process of capturing carbon in long-term carbon stores is known as carbon sequestration.

How much carbon is captured and stored by various different marine habitats and species is currently a very active area of research. With marine carbon sequestration estimated at potentially more than double the amount of carbon removed by habitats on land, the marine environment clearly has a significant role to play in our efforts to address climate change. But it can only do this if we look after it and provide more effective protection for marine areas.

Different blue carbon habitats have different features and carbon capture capabilities and the amount and speed of carbon capture varies a great deal between different marine habitats and species. Here are some of the facts:

* Kelp grows quickly, with new plant material replacing the old growth on an annual basis. Whilst alive, the kelp plants contain short-term carbon stores a then, as the plant material ages, decays and breaks up, some of the material is transport into deeper water where it sinks and contributes to carbon stores held in marine sediments. Kelp can sequester carbon at a rate of 1.7 million tonnes of carbon per year.

* Maerl, a special seaweed that has a calcium carbonate skeleton, grows very slowly capturing carbon within the living plant tissue as as well as its hard skeleton. Although slow growing (max. 1cm per decade!), large maerl beds formed by accumulations of many small, individual maerl plants can persist for a very long time, retaining carbon in a deep sediment of maerl gravel that builds up gradually over many years. In the top 60cm of known Scottish maerl beds, an estimated 448,000 tonnes of Carbon is stored; research indicates this is a gross underestimate.

* Biogenic reefs in Scotland – an example being the massive flame shell bed divers discovered in the South Arran MPA last year – store up to 142,000 tonnes of Carbon in non-living material.

* There are 355 recorded seagrass sites in Scotland, although the true extent of this key nursery and blue carbon habitat is unknown. Seagrass sequesters carbon at a rate of 1000 tonnes per year; these plants absorb and store carbon 35 times more efficiently than rainforests.The blue carbon potential of Scottish seagrass is an active area of research; what is apparent is that the majority of the carbon stored in these habitats is retained in the underlying sediment, rather than the living seagrass itself. The OSPAR commission lists seagrass as under threat, including in Scottish seas. As reported by the SPICe report on Blue Carbon, the habitat is threatened by various human activities, such as anchoring and dredging, which can kill the plant but also destabilise the root structures and release carbon back into the atmosphere.

We know seagrass is a vital nursery habitat for juvenile finfish, but meadows are also significant blue carbon habitats. Seagrass, also known as eelgrasses, are flowering plants, and it is predicted Scotland’s seagrass area is 21.64 km2 – a 58% reduction in seagrass coverage since 1936. Video thanks to Howard Wood.

The oceans contribute to tackling climate change in many ways, and are therefore of great importance to the future health and livelihoods of humans. Seawater absorbs CO2 and heat from the atmosphere: up to a third of the CO2 released into the atmosphere and around 93% of the heat produced as a result of greenhouse gases are being absorbed by our oceans. While this might seem to be a positive thing, warming seas are affecting marine life and our climate and consequently species on land too, and our seas are becoming more acidic as the absorbed carbon dioxide forms carbonic acid. While we cannot just continue to see our oceans as a sponge that can suck up excess heat and greenhouse gases, supporting the ability of marine habitats and species to capture and store carbon as part of their natural function is something we need to encourage.

Blue carbon ecosystems provide many valuable benefits to humans, beyond their carbon storage capabilities. Protecting these areas can provide jobs and income to coastal communities, through recreational opportunities and promotion of nursery habitat for commercial and recreational fisheries. Blue carbon ecosystems provide coastal protection and can help improve water quality, and may are also biodiversity powerhouses, supporting a wealth of life.

Fish and shellfish are affected by a range of different human impacts in addition to those associated specifically with fishing, including loss and damage to marine habitats as a result of developments and pollution. Warming seas as a result of climate change are leading to shifts in the distribution of marine fish in UK waters and, as a result, some species such as cod are shifting their range further northwards. Research has found that while juvenile fish of some species are getting bigger as sea temperatures rise, adult fish are getting smaller. Warming seas can also lead to more frequent and severe harmful marine algal blooms which can be directly harmful to fish and shellfish and increase the risk of marine biotoxins being present in shellfish.If marine ecosystems are damaged or degraded by human activities or natural events, their ability to capture and store carbon is significantly reduced or lost; it can even lead to the rapid release of carbon from the systems, therefore potentially contributing to the climate crisis.

Stored carbon in seabed habitats can be released into the atmosphere by physical disturbance, such as can occur with coastal and marine developments, and through activities such as trawl and dredge fisheries. Such activities can result in release of substantial amounts of carbon, with experts estimating as much as 1.02 billion tons of CO2 is released annually from degraded coastal ecosystems. Earlier this year, findings of a study reported that global trawling releases as much CO2 as air traffic.

With marine carbon sequestration in the UK having an estimated value of £57.5bn annually, improved protection for blue carbon habitats makes economic sense.

Get involved to help our Blue Carbon ecosystems

Although the Lamlash Bay No Take Zone (NTZ) and South Arran Marine Protected Area (MPA) were initially established to recover and protect marine life, they are also providing important protection for blue carbon habitats such as kelp and other seaweeds, seagrass beds and mud. A study of Scotland’s MPAs estimated carbon capture and storage in the South Arran MPA at 8,046 tonnes per km2 – a total of 2,245,047 tonnes of carbon for the MPA!

The protection of blue carbon habitats is one of the top Nature-based solutions to climate change. As noted throughout this month, blue carbon ecosystems are found wide-spread within Scotland’s Inshore waters. If the Scottish Government were to reinstate an Inshore Limit – via a just transition – to our seas then these vital carbon stores would be protected, helping us combat both climate change and biodiversity loss. You can sign the Our Seas Scotland petition calling for an Inshore Limit here.

With COP26 happening this year, we have the prime opportunity to bring blue carbon protection to the top of climate change policies around the world. Alongside COP26, the Scottish Blue Carbon Forum will be showcasing the latest research on Blue Carbon whilst addressing scientific and policy-facing issues to address Blue Carbon developments in the context of the Global Climate Emergency.

Alongside calls for improved protection of our seas, there is increasing interest in active restoration and enhancement of marine habitats to achieve multiple benefits, including protecting blue carbon areas. There are projects underway in Scotland exploring the potential for restoration of seagrass and native oyster beds. The South Arran MPA and waters around Arran provide potential opportunities for similar initiatives locally. We know that local communities have the power to demand and effect change, and will continue to work with the community on Arran to help drive our collective responsibility to tackle climate change.